Chairman of the Membership Committee

Ian Grant served for 32 years as a Royal Marines officer and subsequently became their Corps Secretary for just under 10 years. The latter post led to him serving as a Trustee/Director on several charity boards. A member of the Naval & Military Club since 31 October 1990, he is a proud silver tie member and has served on the Club’s Membership Committee since 9 February 2016. He continues as the Honorary Secretary (also a Trustee) of the RM Historical Society, a Trustee of the RN&RM Children’s Fund and a member of the RM Officers’ Dinner Club Committee.

Ian joined the Royal Marines in 1973 and, after completion of Commando training, undertook a variety of junior officer appointments including operations in Northern Ireland in 1975 and the recapture of South Georgia during the 1982 Falklands War. Specialising as a Landing Craft Officer, he gained his Bridge Watchkeeping Certificate in HMS HERMES. He undertook Arctic Warfare training in Norway in 1982, subsequently completing 3 winters in Norway: experience that has given him an affinity with the Den Norske Klub. Other appointments included commanding a fast patrol boat on loan service in Brunei and 3 Raiding Squadron RM on anti-illegal immigrant operations in Hong Kong.

In 1989, he attended the Army Staff Course prior to an SO2 appointment in the MOD. From 1990 to 1994, he was also the Assistant RM Equerry to HRH The Duke of Edinburgh. Subsequently he served on the Fleet Operations Staff at Northwood HQ and then commanded 539 Assault Squadron RM (3 Commando Brigade’s integral Landing Craft squadron). Further SO1 appointments in HQRM and Fleet HQ undertaking capability management and development for Landing Craft and Amphibious Ships followed, interspersed by two years on the Directing Staff of the Advanced Command and Staff Course at the Joint Services Command and Staff College.

In 2006, Ian became the RM Corps Secretary responsible for Corps charities, planning and organising Corps events and Corps uniform, heritage and heraldic matters. In 2014 he played a pivotal role in organising major events to celebrate the Corps' 350th Anniversary. Ian retired on his 60th birthday in Sep 2015 but remained as a Trustee/Director of the RM Charity, completing 6.5 years in that role on 1 Apr 2019.

He is married and lives in Hampshire. His mother was born and raised in Buenos Aires whilst her father worked there in the railway industry so he also feels a certain affinity with the Canning Club! Ian is keen to support the Board in growing the Club’s membership whilst maintaining the quality and character of its members and encouraging a rich events programme that will attract strong participation from Club members. 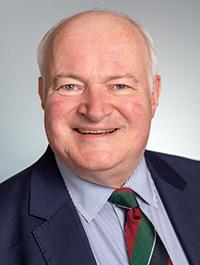